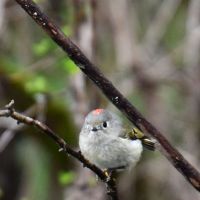 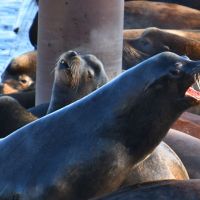 I just found out a couple hours ago that my grandmother died. Grandma Freda Haley of the big Haley clan, and the reigning Matriarch of that family, as well as the Truloves. She was 82, and had been ill for months, but not so ill that this quick passing was expected.

Gramma was the second of 8 children, but Great Uncle Bill died in 1946 when mortar fire hit his tank in WWII. So Gramma was the oldest and all her brothers and sisters loved her so.

She married Rex Trulove and had six children – my Pa is not quite the youngest. I’ve done a bit of genealogy this summer, and by my rudimentary calculations, Freda’s children, grand-children, great-grandchildren – and one great, great-grandchild!!! – and their partners make up about 53 people.
I saw her this August at a family reunion. She was a smaller version of her vivacious self; not as loud, not as brazen, not as big. Her face was less physically beautiful – someone else had applied her makeup for her. Gramma was there despite the deception age placed on her skin, and it didn’t take any effort to see the amazing woman inside. Her devious eyes watching me like a hawk when she made up crazy stuff and told me with a straight face to see if I would catch it. Her bawdy jokes about sex and booze that she made up on the spot. Her willingness to use age as an excuse to cut in line and get the only brownie left, and to get wheeled into the shade when the sun got too warm. She would turn in her chair and look at me and laugh. I got the sense that she was still sort of surprised to be getting away with it.

The memories I have of her are primarily times when I was busting at the seams laughing. She could  – and did – drink as much or more than anyone at the table. She always knew the best jokes and it didn’t matter if I was 12: I could hear them with everyone else. I remember when my Pa brought her to Pine Ridge Inn, in Tamarack, Idaho for the Friday night jam session. She explained that the piano wasn’t tuned to the way she knew her songs, but with a little encouragement, she played and sang all night with the rest of us. (Yep, me and my little guitar and a mic in a redneck bar when I was only 10 years old)

When she lived in Klamath Falls she had this teeny, white and curly haired, wiggly mess of Teacup Poodle named Sheba. One of the only dogs I’ve ever loved. Now, whenever I hear the name Sheba, I think it’s a poodle name. I was with her when her cat had babies, and I watched each one be born in a cardboard box. When the mother cat neglected the kittens, Sheba obliged. I was so impressed.

Her great love in recent years was her trusty companion, Spike. He was an indoor cat and gave her love back to her. When Gramma wrote a newsletter for her senior community, she included “Spike’s Corner” for news about pets. Spike died this year too.

Gramma was the only person I remember who washed my mouth out with soap. I don’t even remember what I said. I knew I deserved trouble, and there was no one else there to appeal to. I just accepted it. She opened a brand new bar of soap and made me put the whole thing in my mouth and move it around. Egad! That was horrible. The punishment was so effective that it wasn’t until I joined the Air Force before I was brave enough to learn how to cuss properly.

I have memories of her at huntin’ camp. Back in the days where it was a grown-up’s world and the kids were only invited along because they couldn’t be left home alone. There was coffee or beer to drink at huntin’ camp. I couldn’t bear coffee at that age, so I had beer for breakfast, and then I’d go find a creek to drink, or melt snow in my mouth if we were lucky to get an early fall storm. Gramma seemed at home camping. She was there at the famous Easter camp at some pond. Was it Otter Pond? Beaver Pond? The Easter Bunny found us out there and hid eggs in the Oregon Grape and amongst the pine and fir trees. Somebody imbibed too much and fell into the fire. That was the year I learned how to get over my squeamishness and bait my hook with a live grasshopper and I caught my first fish. It was only about 4 inches long, but my Pa was so proud he filleted it for me and fried it up anyway.

We’ve got this picture of Gramma in her chair right in a river. She’s got her pant legs wet, with her bare feet in the moving water, and a coffee cup (probably filled of whiskey and ice). I can’t remember where that was taken. Maybe it was one of the times she camped with us at Brownlee Dam on the Snake River.

She always laughed and laughed. She made everyone else laugh. She had had a hard life, sometimes things were bountiful, but often in poverty and want. All her kids and her siblings say to me about it is how she made life fun no matter what the circumstances were.

We are all so proud of her.

She was proud of her Cherokee heritage. Our Haley family came from Talequah, OK to Oregon. Gramma told me she was called Ho Ho Nay, meaning Calf-Woman. There was a great little story about why, but sadly I’ve forgotten it.

I complained once about being so fair skinned and blonde, saying I don’t look even remotely Cherokee. She told me to shush because she had a framed photo of a Cherokee Chief on her wall and the man had green eyes. I have green eyes. It made me feel better. I have big Indian eyes, especially when I was younger. I’m so white I’m translucent, but when I tan, I get golden dark, dark. I have a lighter streak of hair that naturally grows on my right temple and didn’t think much of until I saw a photo of Gramma with her hair parted in the same place, and a white-blonde streak in the same spot.

Send me some love. I’m so sad I couldn’t be at work today. I need to be strong for the services tomorrow in Eugene.

I’m sending love! I am sorry for your loss, and thankful for the rush of memories you provoked for my own grandmothers that have passed on. Thank you for sharing your grief and your memories with us, my dear friend. And for holding space for your grief by taking the day off and really allowing yourself to experience it.

Oooooh, so timely, go read Joy and Sorrow. The depth of your grief is a reflection of the joy your Gramma brought you.