I’m a mom. I’ve got to go on about my kid now and then. Can’t help myself.

Tara has been dancing for years and is not among those ballerinas who is fiercely focused and driven and denies herself the pleasures in life to get a landing just right. She dances because it makes her feel good, and because she gets to share in the dancing of her dear friends. At first, that frustrated me, because I am driven and competitive and aggressively pursue skill, as if it has something to do with how valuable I am.

Over the years I have learned from my kid: how to work at something for the love of it. Tara makes sacrifices to be at practices and endless rehearsals, missing out on parties and homework time and eating meals at reasonable hours. But it’s all for the pure joy of it, and in that way, she keeps ballet fun for herself. Years and years of practicing the same moves over and over, and yet the desire to get dressed and go do it again remains strong.

Saturday we went to Washington Park in Portland, at an outdoor amphitheatre just below the International Rose Test Gardens (did you know Portland is also called the Rose City?). Her studio is Portland Metro Arts, which hosts all kinds of artists including those who paint, who play piano, who Irish step dance, who sing, as well as those who ballet. Saturday’s performance was a showcase of different talents.

The dancers did short pieces from their recent full-length ballet, Alice In Wonderland, with additional classical ballet pieces, and some swing dance. Sadly, the sky was getting pretty dark by the time the swing dancing began. I was sitting far away from the stage and had my lens in full zoom. The exposure was longer because of the dark, and extra-sensitive to movement. This meant that all of the later shots were blurry, but they did make some pretty interesting images, so I included them anyway.

Earlier in the week there had been a threat of rain, and Tara worried about what rain on the stage would do to their ability to dance well. Instead, the weather was brilliant. It was sunny, dry, not windy, and warm. The steps of the amphitheatre filled with people of all ages and the murmurs of talk and laughter filled the green bowl we occupied. 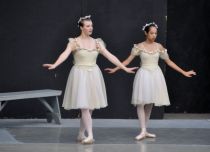