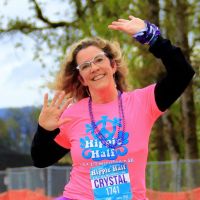 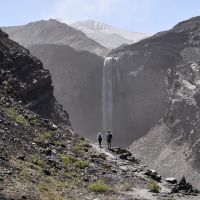 The end of Pedro’s birthday road trip was actually the beginning. His birthday was in the middle of the week, but we had started our vacation the weekend before. We stayed Tuesday night at the McMenamin’s in Gearhart, Oregon. And Wednesday morning was the actual birthday.

We checked in to the hotel and got the rundown on how to get stamps for my McMenamins passport, what pubs were open, etc. We even got a birthday stamp. Gearhart Hotel is very close to the beach and right on the edge of a golf course. Naturally, golfers like to stay here. The entire hotel and restaurant and bar have golf themes.

We dropped our luggage and looked around the room, which was small and cozy. The headboard of the bed was the same shape as our headboard in Bothell, Washington last month.

While we were still feeling awake and alert, we decided to go solve puzzles and get stamps. We explored up and down hallways deciphering clues. At this location, we had to scan QR codes and then answer quiz questions. The answers could be found in the different artwork and photographs displayed in the building. This is a new thing, and maybe it’s exclusive to Gearhart Hotel, but I wouldn’t be surprised if we start seeing the online quizzes from now on.

We were not hungry, since we were still sated from the seafood at Mo’s in Lincoln City, but we were in the mood for a drink. Downstairs we found a tiny pub. No one was visible, and we happily explored till the very friendly bartender appeared. She said she was about to close and asked if we minded if she continued to clean while we had our drinks. No problem.

We spotted the wall of scotch behind the bar and that’s all the suggestion we needed. The bartender laughed and said it’s always the hotel guests who ask for the scotch and never the golfers. “We put this display out here for them, but they never want it.” After a very comfortable wind-down from the day, we said goodbye to the bartender. As we got up to go, she told us there was a fire burning outside as well, and she always piled logs on before she left for the night. Feeling rather impressionable, we immediately decided to go there next. We STILL had not finished the Zinfandel from the yurt, which had been carried over from the Itty Bitty Inn, so we grabbed the two glasses from the little table in our room, grabbed the half-full bottle of wine, and went outside to enjoy the stars.

It was a lovely setting, and I managed to get the photo of the Hotel, with Orion, at the top of the post.

The next morning, both Pedro and I woke up with a desire to go for a run on the beach. He is training for the Shamrock Run race in Portland, and I just wanted to be active after all that sitting in the car for days. It was a very very cold morning, but bright and sunny. We put on some warm running gear, complete with ear-warmers and gloves, and began running as soon as we left the front door.

We ran only a couple of miles. I know Pedro would have liked to go farther, but I am not in as good of shape as he is. I did my best. He let me walk when I needed to. 🙂

After our run we cleaned up and packed up, and managed to get ourselves out of the room just in time for our 11am checkout. By that time we were hungry. We went to the Sand Trap Pub and had a wonderful lunch. Then we stepped outside to take a look at the grounds in the daylight.

One last thing I remembered to show you is the Tsunami warning network around here. I don’t even notice it anymore. When I lived in Eureka, California, and here as well, there are tsunami evacuation routes marked everywhere you go. The signs are along all the coastal roads and even in the neighborhoods. But I thought this might be interesting for anyone who does not live on the coast. It’s a way of life here to just get a good sense of which direction to run in the case of a tsunami.

I wished Pedro a Happy Birthday and thanked him for having it so we had an excuse to go on this great trip. He said it was no trouble at all.

In an hour and a half we were at his place and we unloaded half the Dragon Wagon. I kissed him goodbye and drove the final hour to my place and hugged my kitty Racecar, who about that time was wondering if I would ever come back.