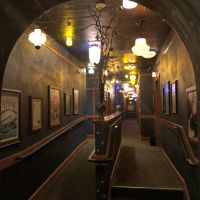 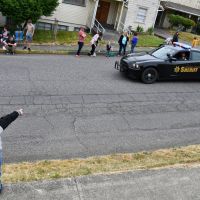 We spent a leisurely weekend at my dad’s house in southern Idaho over Labor Day weekend.

Man, I love that place for its peace. The Owyhee desert is too dry, too brown, for me to really love. So it’s simply the environment that my dad and his wife create for visitors. Not to mention the incredible food.

While Mark studied for his geologist certification test, Tara and I went to visit Gramilda and Rex on Sunday. They seem to be doing well. Gramilda was active and in good spirits. She’s going blind. She doesn’t say anything about it, but just doesn’t look at stuff. You know how eyes will follow your talk or your hands in a conversation? I found that interesting, since I’ve never been around a blind person. I am really proud of her for being so strong about it and not complaining.

Tara and I drove on the other side of the Snake River to get a look at her Grandpa and Grandma’s house from that side. When we got back, Pa told me that we had passed rocks with petroglyphs, and didn’t we stop to look at them? Arggh! I would have, if I had known they were there!! It’s a long trip, so we didn’t go back then. But now that I know what to look for, I will go back another day.

We swam in their pool, which was an excellent cool-down in the hot weather. I think if I lived out there, I would have to have a pool too. Tara and I tried swimming in the Snake once. In the summer it’s full of muck and sort of disgusting to swim in. The middle is clear, where the current remains strong, but then… there’s the problem of the current.

Each morning, everyone tumbles out onto the deck in the dark with their coffee and waits for the sun to come up. It’s my favourite peaceful ritual there. Pa and Michelle have stepped up their coffee quality since my last visit.

Finally, they aren’t drinking that pale, flavorless yuk they’ve had for so many years. But in any case, the quiet of listening to the birds in the dark, waiting for the sun to climb over the ridge across the water, is great therapy.

This time, however, Pa and Michelle could not stop talking. I don’t know if it’s because of age, or if they’re lonely out there, or if they were nervous about meeting Mark for the first time (except for Grandma Haley’s funeral, which didn’t really count as a visit). Blah blah blah. Mark and I are not so much talkers. We tend to prefer silence in the mornings.

I wondered what they thought of him. I’ve been having reservations about my relationship for the first time, and I’m interested in feedback. I am not so critical of Mark, as I am recognizing that I’m not happy and trying to figure out why. Mark is an awesome person. Truly the most modest and spiritual man I’ve ever been close to. He does things that drive me crazy, but doesn’t everyone’s partner drive them crazy sometimes? He can be a giant, needy, baby…but in my opinion that’s a typical male tendency. I am sure my dissatisfaction is due to my own wonky head, and the reason Mark is on the radar is because I see him every day.

So all too soon the weekend was over, and we had to make the loooong long drive back home along I-84. It’s a full 8 hours. More if you stop to eat or explore. We decided that, in the future, as long as flight prices stay low, it would be worth it to shell out the money and get two extra days to enjoy, rather than drive.

Oh yeah, one funny: Mark flipped out when I told him I wanted to do a road trip on Labor Day Weekend. “Back in New England, on Labor Day you hunker down and hide because the traffic is so bad. If you can, you don’t leave the house.” “Well, we’re heading through eastern Oregon,” I said. “There probably won’t be much traffic. You know how empty those roads can be. There will be increased traffic, for sure.” Mark laughs, “Oh, so instead of four other vehicles on the road… I’ll see, what, ten?”

Sure enough; the highways were empty empty empty. Man, I love the West.