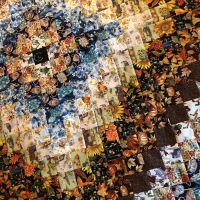 Ok, so everyone owes the IRS at one point or another. But $46,182? That’s obscene. Forty-six thousand, one hundred eighty-two dollars. Right. You know, I can’t even get worked up about it because that amount of money is simply… ridiculous.

And plus I’m mad at Mark. It’s his bill, but since we’re family it’s our bill. Apparently in 2007, in an attempt to improve the outlook of his investments, he pulled all of his investments out of their diversification, and dumped them into…. well… banks.

In the meantime, because of his method of investment – pull the money OUT, then buy new and completely different stocks – each sale registered as income. It doesn’t count that he just bought more stocks. Which failed. The IRS thinks we had a great 2007 based on his stock sales.

His defense is that he used the 1040EZ and it didn’t ask him any questions about his stocks, so he didn’t put it down. “The EZ form? Seriously?!” ( I suddenly remembered that until his divorce was final a couple years ago, his ex’s family accountant did his taxes for him every year.) And then he said he sort of forgot about the risk he took, because he was so worked up about losing his retirement savings when all the banks failed. “What?!! How can you have lost track of that extremely important detail?”

So ok, there’s probably some denial going on here, probably some embarrassment, probably some legitimate bone-headedness. Needless to say, he is not allowed to do his own taxes anymore – so long as T and I are impacted.

The bottom line is: that was a really yucky thing to get in the mail.

Last week, Mark “celebrated” his one-year anniversary of being unemployed. The good news just keeps raining on in.

Here are some other things that also bite the big one:

They are all addressed to someone different. In order to cover all the bases, I suppose. To: Mark, Crystal, Mark & Crystal, The Trulove Residence, Homeowners, etc. Unfortunately, a duplicate set of all those envelopes was also served to me. In my living room. When no one else was home to comfort me. 😦

As if getting served wasn’t humiliating enough. Take a look at what was inside:

But the worst part of all of it was the notice at the bottom of the letters. The precise details of how, where, and when our mortgage holder plans to unload our home. This is hard stuff to read. Very hard.

Ok, but don’t worry about us. Mark’s already negotiating with the IRS to figure out how to chop that number down. And Wells Fargo was encouraged by the Obama Administration to cut us a deal. We qualified for a loan modification program and they have cut our mortgage down to something we can afford just on my income.