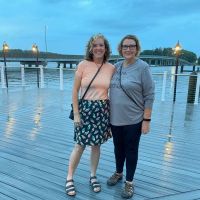 My man’s been involved in AA pretty actively for all the twenty years he’s been sober.

He goes out of his way to find AA groups that appeal to him. He has totally bonded with a Portland group called the Knuckleheads. It’s a men’s only group. Turns out, it’s even more specialized than that, because it’s apparently sort of a fringe AA group. Many of them are young, rowdy, hipsters, and slightly older, hip family men that used to be rowdy. My man says he goes there and feels old and out of touch – and he’s 37. But he LOVES those guys.

I’ve met some of them at non-knucklehead gatherings, and they are a great group of guys filled with a fiery energy. Young, full of life, full of humor, and many of them absurdly successful in their lives despite a history of forays into substance abuse which drove them to turn their lives around. My image of them is of healthy loving family men – so many of them are married with little ones.

…but my guy says that at the men’s meeting, a different side comes out. Playful, supportive of each other, sober and dedicated to sobriety, yes, but… also a buncha’ guys at the core. Damn, I wish I could witness it. I can’t even accurately pass on an anecdote, but it doesn’t sound like any AA meeting I’ve been to before. I guess heckling the speaker is pretty much standard. When somebody claims victimization about something, the audience members might call him on it, and “help shift their perspective” by giving him a bunch of shit until he talks about something else. I guess tempers flare and an occasional hollering match breaks out, and then they drink more coffee and within another meeting or two, or maybe even right away… they work it out and move on. It’s not a place for tender egos or a soft constitution. I hear tales of men dropping out and moving permanently to other meetings all the time.

The Knuckleheads have earned themselves a reputation in Portland, apparently. Some other snooty AA groups think that these guys might not be good enough to be recovering addicts? I don’t know the exact complaint, but it’s something like that. …and in any case, that’s the whole point of the Knuckleheads group. Who says you have to change your personality to stop drinking or using? You have to change your mindset, your priorities, your patterns, your approach… but if you’re tattooed and have steel spikes coming out of your bottom lip, you don’t have to pretend to be a businessman and join a committee in order to get sober.

I know I’m not part of the community, I know I haven’t been invited to speak about it, but I appreciate what the knuckleheads are doing. Here is a group that’s going to make sense to some men that won’t be touched by any other AA group.  You can be a punk. You can be a hotheaded 22-year-old man. You can be who you are and still sober up.

My man brought home a flyer for one of their upcoming events. I was reading this thing, first for amusement. Then I became envious and I wanted to go! Those other stuffy meetings I’m not as interested in, but THIS! I would actually be willing to rearrange my schedule to get myself to this one. And I don’t have a problem with substance abuse and I’m not male. I wonder how much fun this might look to the target group?