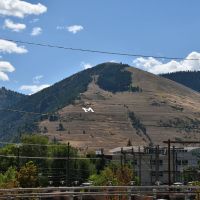 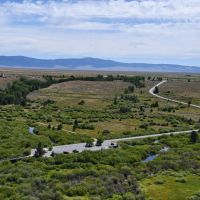 It started with an ordinary night out to eat at one of the very few restaurants in tiny Rainier. I stepped out of the Jeep in the parking lot, and was awash in the sounds of barking, growling, and moaning. Sometimes I can hear sea lions barking while standing on my porch, several miles away, but this sounded more impressive. Before going into the restaurant, I walked down to the beach in the dark, following the sounds, and came to the Rainier Marina. I could barely see the docks, but I could hear that they were occupied. I took this video for the sounds. Even after hearing it twenty times, it makes me smile!

The next morning was partially sunny, so I took my camera back down the hill to see what the scene looked like in daylight.

I wasn’t the only one with this idea, because other locals were parked on a hill overlooking the docks. I was armed with my Nikon and a zoom lens, and got some really fun shots.

Hey! Remember I had camera problems starting during my trip to Chile? At a camera store, before sending it off for repairs, the technician suggested a couple of ways to trouble shoot. One of his suggestions was to try a different lens. I had been almost exclusively using the Tamron lens because it can use the autofocus on the Nikon, and it goes from 35mm to 270mm! So convenient. I tried the 18-35, and also the 70-300, and viola! Problem fixed. It means my Tamron is dead, but not the camera. Yay!

I chatted up one of the men in a truck, who turned out to be a local fisherman. He was very unhappy about the sea lion situation. He explained that the local fishermen view them as a menace because they eat the fish. Smelt populations wax and wane, but since the year 2000 their numbers have been so low they were added to the Endangered Species list as a threatened population. The huge sea creatures were gobbling up a lot of what is available, leaving even less for the humans. This is also a problem during salmon runs, with salmon populations already threatened by human activity like dams on the river. From an anthropologist’s perspective, I see it as a way that the fishermen respect the wild animals, and I think the rivalry is almost touching. People curse the seals and sea lions as though they are equal rivals for a limited resource, and it draws them together and highlights what they have in common. I recognize that I have the luxury of using this perspective because I don’t depend on fishing for food or for income.

Still, I had to bite down to keep from commenting to the fisherman in his truck, that while he professed to hate the sea lions, here he was, among other crusty old fishermen on the hill, having his lunch break with his windows down, listening to and watching them.

Rainier sits on the Columbia River right across from the mouth of the Cowlitz River. This  year, like last year, a one-day, five-hour net fishing season was open on February 25th. People stand on the riverbank with nets and scoop them up. Reports are that no one got a fish this year on the Cowlitz. I imagine there will be even more cursing about sea lions now.

There are enough smelt to bring their wild hunters 45 miles inland from the sea, however.

In hopes of protecting our Marina, workers went out in January to build barriers to keep the beasts off the docks. The combined weight of hundreds of massive sea lions will sink the docks. Wooden fences were constructed, and lined with bright orange plastic netting, to make the fence seem more intimidating. The sea lions said a collective “Whatevs,” and pushed the fences aside and lounged on the docks anyway. I’m afraid the already-poor city of Rainier will have to build new docks, or at least do some significant repairs, when all is said and done.

The other thing I saw down there were the signs of commerce and industry. I know it’s factories and massive machinery and big dirty ships, but I have a childlike joy when I see it all. The lights at night (as you can see in the video at the top) are nothing short of beautiful to behold. The exhaust from the pulp mill is like a scene from a science fiction movie. Everything is huge! The factory towers, the ships, the bridge, the enormous docks across the river at the Port of Longview, in Washington. All of it delights me.

For comparison, I took a second video with my phone, to give you a better sense of the whole view.

9 thoughts on “Sea Lions on the docks”