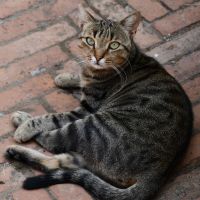 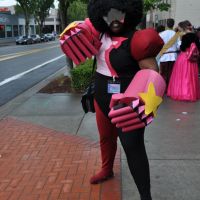 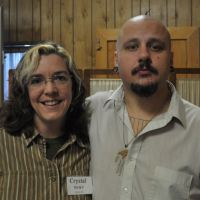 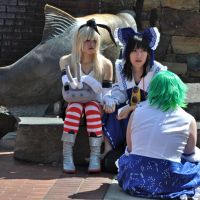 {I called it right when I realized I needed to blog on the road or I’d never be able to post my whole week of road trip once I got back home. As you have noticed, being home is like entering the caucus race* from Alice in Wonderland, and time for blogging is hard to come by. But in any case, I’m here with bells on. Nice to see you again!}

Waking up walking distance from the Space Needle was perfect for me and my friend M on Friday morning. My brother recommended a coffee shop, and we hit that first. Caffe Vita is strongly encouraged, should you find yourself in Seattle!

I had it in my mind that I would lead M directly to the Pike Place Market, since he likes markets so much, but we chose a route that went past the Space Needle, because, duh, Seattle. Well, that’s all it took. Only ten minutes into our day, and we were in line to ride the elevator to the top!

My disappointment was palpable, and even M asked what happened. It was a particularly hazy day. Really bad. I pointed out Mt. Rainier to him, but a person sort of had to know it was there to find it through the airborne particles. M was unimpressed with looking in the direction of the mountain, and more excited about the view of the city. And he should be! It’s spectacular! Only, in my mind I was comparing it to all my other visits, and this was truly the worst one. I wanted to show off Seattle to a Sri Lankan/ Bostonian.

By the time we reached the bottom, we had to hustle to meet my brother and his girlfriend for lunch. We zoomed through the market, not there to shop, but only to jog through on our way to the federal building. M was in awe, as I knew he would be. I am SO glad we stopped in Seattle instead of pushing on home the day before.

We met up at the federal building, and K led us up to the 34th floor to her office and a one-of-a-kind view of the city. Everyone who has visited knows the views from the Space Needle, but we got to view the needle itself! What a treat! My spirits lifted.

K bubbled about the “secret waterfall” on our way to lunch, so we went to visit the Waterfall Garden Park, built in honor of the United Parcel Service (UPS). It is enclosed by walls and completely invisible from the outside, but an oasis inside. Please see Lucy Wang’s photos and description of this place!

Across the street from the waterfall, we ate at another place I’m going to have to recommend: The London Plane. It’s a restaurant/flower shop/specialty goods store in a reclaimed industrial building. The light inside and the sky-high ceilings are transportive.

Satiated, we said our goodbyes and walked back to the market. It was a delicious madhouse that never fails to delight me. We even caught a glimpse of the famous fish mongers tossing a codfish. Here’s an old video about the fishmongers that I had to watch years ago when I was a forecaster with the National Weather Service:

It was time to hurry home. We hugged goodbye to my brother I, and to the cat, Smokey, and in seconds we were heading south on I-5, and racing toward Portland at about 4.6 miles per hour, bumper to bumper in 5 lanes of rush hour traffic.

Somehow we made it on time to catch a show in Portland. We swung by the Blue House to pick up Tara, and went downtown to the Keller Auditorium to catch Shen Yun. I had purchased the tickets back in December, and we had been waiting to see it all this time! The show was made up mostly of dancers performing traditional Chinese dances and dances that told stories. There were two professional singers and one musician who played an erhu, a two-stringed instrument that M particularly liked. The orchestra was entirely Shen Yun musicians, who performed all the music for the dancers. There was a political message that was only possible because it’s a New York-based Chinese group and not a China-based group.

Saturday morning we took Tara to the Convention Center to get into line for Abby’s Closet, an organization that provides free prom dresses to people interested in a free, used, prom dress. We had barely begun our day when Tara texted us to come back. Turns out it was a six-hour wait and Tara had other plans to meet friends that day. So the three of us explored Washington Park, the International Rose Test Garden (sans roses this time of year), and Pioneer Courthouse Square. Tara went off and M and I rode the Tram up to Pill Hill (so-called because there are multiple hospitals at the top of the hill).

Our long, fabulous journey was finally at an end, and I took M to the airport for his flight home to Boston.

At home I began the daunting tasks of home upkeep that had piled up in my absence, beginning with laundry and mowing the lawn. I had just finished mowing the lawn, all green-smeared and in my cowboy work boots, when Tara came home and begged me to go back to Abby’s Closet to see if we could squeeze in before closing, in 30 minutes. I washed my hands and off we went, cowboy boots and all!

It was evening, and they got us through in two hours rather than six. The staff made an exceptional effort to keep us all happy and entertained and moving through. {Imagine: hundreds of teenagers and thousands of dresses. Instructions: Pick one!} I am glad I experienced that with Tara, who leans alternately from tomboy, to stereotypical masculine characteristics, to stereotypical feminine characteristics. It was a really girly experience, and neither of us is particularly girly, so it was good that we could lean on each other in that overwhelming cavern of pink and lace and sparkles.

What a long and action-packed week it was. I hope you enjoyed the journey with us. 🙂

Post Script: M texted me from the airport. “You would not believe what happened in security! The TSA guy going through my bags said, ‘Let me guess: Tillamook! But why do you have so much cheese?!’ I started laughing, and had to tell him what happened at the border. He laughed too.”

*After swimming around in Alice’s pool of tears, the animals need to dry off, and the Dodo recommends a caucus race. There are no rules; all of the participants run haphazardly around in no particular direction, and everyone wins.