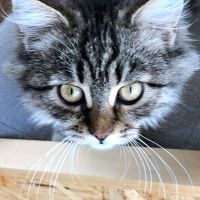 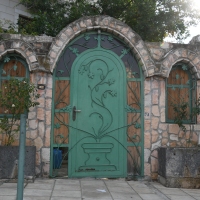 Back in November I found out that one of our Mt. Hood Cherokees members is a volunteer woodcarver at a carousel museum. Councilmember Anne said on the Zoom meeting that it sounded like a good story for the newsletter, and I agree. Did you know I edit (and write, photograph, design, publish, and distribute) a newsletter for the Mt. Hood Cherokees? I have been doing that for seven years now and I put my heart into it.

Oweta Smith invited me to the Historic Carousel & Museum of Albany, Oregon. I wanted to ask her about woodcarving, and she suggested that I meet her there. I first heard of the museum a short time earlier, when Tara said they were applying for a job there. I was eager to see it. The building, near a park in downtown Albany, is stunningly beautiful and I’m sorry I did not think to get a photo of it.

Gustav Dentzel came to America from Germany in 1864 and is one of the country’s first carousel makers. He is credited with introducing the idea of a menagerie of animals on a carousel, rather than the traditional horses. His great-grandson William Dentzel III donated a historic carousel mechanism when he heard that the city of Albany wanted a carousel. The mechanism was brought to life by local machinists who formerly worked at a paper mill. Likely resulting from this fabulous family history, William had a collection of historic carousel animals. In the museum, the citizens of Albany have the city centerpiece and tourist draw they were hoping for, and William has a beautiful safe place for his collection.

Just like the city of Leavenworth that I recently blogged about had to re-invent itself, the city of Albany did the same. Wendy Kirbey pitched the idea to the city council in 2002. Oweta was living in Albany in 2003. “I read a notice in the paper saying that they were hoping to create a carousel in downtown Albany and wanted people to volunteer to learn to carve. I thought, ‘Well, I’ve never carved before. That sounds fascinating. I’ll give it a try.’” Jack Giles, the lead carver, taught her and the other volunteers how to carve, and it took until 2017 to have enough animals and sufficient donations to open the museum.

Sponsors of carousel animals get to choose the animal and items that go with the animal, and the ideas are reviewed by a committee. Once the plans are drawn out, it then goes to carvers who begin working. Animals on the carousel are worked on by multiple people. Oweta has been carving on the carousel since 2003 and is currently working on a Christmas Clydesdale.

“Back when it started,” Oweta explained, “the animals hadn’t been adopted yet, so we started with flowers and pieces for the rounding board above the animals. It turns out that carving flowers is a great way to learn, so that tradition is still used today. The hippocampus was one of the first animals.” She explained that carousels from around 1900 were all horses, but traditionally had one hippocampus. We walked over to look at the hippocampus and she said, “The two front legs are mine. It’s really amazing, as someone who hadn’t carved before, to say, ‘Wow look, I did that.’ I did bits and pieces of a number of different animals. The orca is the one I spent the most time on. I started it, and took it to about 80%, and then they had a team of carvers take over and finish it up.” She also worked on a horse named Vincent with a theme from Van Gough’s Starry Night, and on a burro named Summit.

I asked if she had ever thought about her Cherokee connections in relation to the carousel. Oweta took me over to the ring dispenser, which she had been able to sponsor, so she got to choose what it looks like. “I chose the Phoenix. I thought it was a good tie-in to the Cherokee Phoenix newspaper, which showed me the phoenix existed in Cherokee culture.” Spirit animals are in the clouds below the phoenix, including a turkey vulture, that she learned is also important in Cherokee culture.

Oweta introduced me to other volunteer carvers working that day. They worked together in a room, each with their own carving task in their hands. They used hand-held woodcarving tools to carefully chisel off small bits of wood. Giles, the lead carver, moved from person to person making himself available for questions, and giving encouragement. Most people had photographs or models in front of them to help them know where to carve and make their piece look realistically three-dimensional. Oweta explained that when people start carving an animal they begin looking for photos and animals in real life to see what they really look like, to help them carve. When she was working on the hippocampus, and trying to find examples of what a horse’s legs look like, a friend who has horses told her, “You know, they’re all different.” She laughed at the memory, and said, “And that’s true. They are.”

All of the carvers started good-naturedly asking me when I was going to join them as a volunteer. The question caught me completely off guard. Oweta reassured me that they would be happy to teach me, and said I should give it a try. So I did! Jack Giles came over and gave me a quick lesson and I began carving. It was a little addictive, and I stayed there for two hours, working on a flower.

The final peg in the story is that about two weeks after my visit, Tara got the job! I promise that my visit was entirely unrelated to Tara’s efforts, but I did proudly tell multiple people there that my kiddo was hoping to work there soon. While much of the work done at the carousel is done by volunteers, Tara is a paid employee and already loves the environment and their co-workers.

If you want to see drawings and explanations of each animal that was carved for the museum, this link will take you there.

13 thoughts on “Woodcarving at a Carousel Museum”