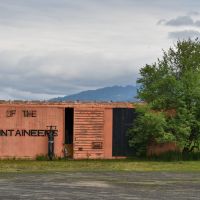 My friend Vladimir and I have known each other since I lived in Eureka, California. That was right around the turn of the century (makes it sound like the distant past, huh?). So yeah, 18 years or so. At the time we both worked for the National Weather Service. Vlad recently retired from his forecasting job in Honolulu, and decided to move to Portland. Sans car. While Portland has super great public transportation…it still limits a person to the city. He has yet to get a really good look at his surrounds.

It was Vlad’s idea a while back to enlist my help (and the Jeep) to explore the local area. Our plan is a series of mini-road trips (RTs) to see some of the local stuff that a person can’t get to via lightrail.

Monday we drove north into Washington state to see Mt. St. Helens. This is the volcano that blew in May 1980. For Vlad and I, growing up here on the West coast, we clearly remember the news stories and the fear and the awe…not to mention the ash clouds. We went to see what it looks like today, 38 years later. The surrounding beauty is remarkable in that it looks so far along the path of recovery. At the same time, it’s genuinely startling how much has not yet changed since the eruption.

We drove to the Johnston Ridge Observatory in the Mt. St. Helens National Volcanic Monument, and arrived just in time to hear a Ranger talk about the high points of the eruption. First, there was the largest landslide in human recorded history, as the north side of the mountain sloughed off. Right behind that was the explosive blast that blew the whole side and top off the mountain. Then the pyroclastic flow, which is not so much a “flow” but more blasting, of ash, rocks, lava, etc. that hurtled down the mountainside and destroyed everything in its path.

The Ranger talked all the way through the area’s natural recovery, including the giant Roosevelt Elk herd and the mountain goats that live in the crater. He ended on a very interesting tidbit. Due to the characteristics of this particular spot, we have the fastest-forming glacier in North America, possibly the globe. Pretty cool, huh? I didn’t realize glaciers were growing anywhere. Snow falls into the crater, which is sheltered from the sun. The dome is slowly growing inside the crater, compacting the snow up against the walls. Regular showers of rocks and ash coat the top of the ice from tiny eruptions from the mountain. Badda-boom: recipe for glacier.

We hiked a trail in the area, ate a picnic lunch with a fabulous view and a chipmunk that needs to lay off the carbs, and then got home by dark.