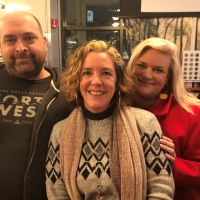 A neighbor told me about a local bee company that will pay people in honey for the use of their land. Liquid gold.

I spoke with Yelena a few times and arranged a meeting with Pavel Martynov, patriarch of a friendly Kazakhstani family in Battle Ground, Washington. He showed up with his daughter Anastasia to translate, and we all walked around the property to choose a good location for the hives. Bees need water and they like the sun. Pavel chose a spot that was the exact place I had been hoping he would like. Translation: a part of the property I spend very little time on, and thus am more than generous in sacrificing for bees.

Now I am doing my small part for the bees, the fuzzy buzzing critters upon whom so much of the world’s health and wealth depends.

I’m sure you have all heard about bee population decline. A 2015 report from a United Nations group found that populations are declining for 37% of bee species, with 9% of butterfly and bee populations facing extinction. I’ve been worrying about bee populations for years, and that is amplified by my bee-adoring child, who took an apiary class at Oregon State University last year. Come on, how many of you have offspring who did this to their leg:

Despite the news about efforts to curb bee decline, according to the UN, the world’s beehive stock rose from around 50 million in 1961 to around 83 million in 2014. Average annual growth has accelerated to 1.9% since 2009. Worldwide, Argentina produced the most honey of any country in the world in 2005, followed by the Ukraine, the United States, and then Russia. It’s no wonder my new Kazakhstani-American friends chose this business, with a rich history of beekeeping in their ancestral land as well as their new land.

WA BEE Company, LLC (sorry, no website, or I’d link you) showed up Sunday morning with a truck loaded down with hives of sleepy bees. The previous day I talked with Yelena who said to expect them between 7am and 8am. At 6:15am I realized that the mechanical noise I heard was not my usual dream about forklifts (kidding!), but a real forklift outside my bedroom window. I bounced out of bed and threw on some warm clothes to go outside into the chilly morning and watch. (Yes, I’m one of *those* people, who wakes up and is ready to take on the world in five minutes.) (…just don’t try to get me to do anything productive after 6pm)

Pavel and his son (can’t remember his name) unloaded pallets of bees and drove them down the hill to a flat spot next to the creek. His son chatted away to me while his father worked fast, trying to get the bees all settled while they remained cold and still. They unloaded 8 pallets, or 32 hives of bees. By 7am, the whole operation was done, and Pavel backed the forklift back onto the trailer and off they went, a quarter mile down the road, to unload a bunch more at my neighbor’s house. This is his 4th year my neighbor has worked with the WA BEE company.

Since Sunday, I have been wandering down to gaze at the bees when I get a chance. The first beams of morning sun hit the hives directly, and they are bathed in sun for at least 2 hours in the morning (that is, if it’s a sunny day) before the sun moves behind trees. This warms them up and they go from deathly still to cacophony in minutes. It is fascinating to watch them, and I do not tire of it. I get pretty close, because they have an air highway of sorts, and while the middle of the highway is crammed with bees flying directly away from, or back to their hive, if I stand just to the side of the highway, there are very few bees.

They hit the sack pretty early, just like me. Even if it’s a warm evening, and even if there are still late rays of sunshine on the hives, they wrap it up in the early evening. When I go down for a visit I can only see a few dazed and sluggish fuzzy bodies crawling around the holes that are the entrances to their hives. One evening I was inspecting the hives pretty close, walking between them, getting a good look at the little bodies getting ready for bed. A half-hour later I was in the house at the computer and something tickled my leg beneath my loose pants. I shook my leg a couple times, grabbed my pants with one hand to shake out the bug, absentmindedly playing solitaire. I pulled up the pants leg and didn’t see anything, and went back to my game. After a few minutes, the tickle began again, at a different spot.

I methodically turned my pant leg inside-out, looking for the persistent crawly thing. Reached up into the folds and couldn’t feel anything. Shook the material, stomped my foot to shake it out, and finally, out popped a small yellow dazed honey bee. It must have crawled onto my foot and rode all the way from the hives back to the house with me.

My POINT is… they aren’t vicious.

I carefully carried it outside and wished it good luck surviving the cold night, 100 yards from the hive. Tara says it’s unlikely it survived the night, but if it did survive, there is no doubt it would find its hive in the morning.

So wish us luck in learning to thrive together.

I’ll leave you with a fun photo of a visitor who went to see the bees with me this morning. If you read some of the other blogs that I read, you may recognize Bone, a travelling bone, wearing a rather flattering leather vest while visiting me in Rainier. I’ll write more about Bone later.