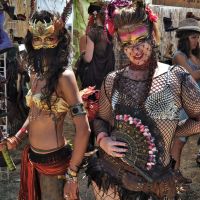 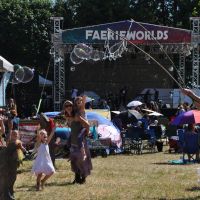 For Tara’s 18th birthday celebration, a trip to the Enchanted Forest  was requested. We went last year and loved it, so I was on board to visit again!

This enchanted theme park has moved through too-uncool-for-middle school, and has become a hip place to go, if you are a teenager. It is clearly designed for small children, with some great additions since the 1970s that will entertain the parents, but what keeps this place well worth a visit is that it slightly misses the mark, and crosses the Uncanny Valley. What I mean is, it’s just on the other side of cute, and has turned creepy in a most delicious way.

It is so much like the idea of Disneyland that I am amazed no one has sued. Thank goodness, because the Enchanted Forest, south of Salem, Oregon, is a high-quality theme park that’s a blast for the little ones, and genuinely amusing for everyone else. All that – for an entrance fee of $10.99, and tickets for the rides at $1 per ticket.

The park is a true family effort, envisioned by Roger Tofte, supported by his wife and children, and opened in 1971. A son grew up and learned animatronics, and built for us the awkward, jerking, breathed into life-sized beings across the park. One daughter wrote and directs the comedic plays that show at the theatre, and she also wrote all the music heard in the park, which is always played on pipes.

It begins just past the entrance, where guests walk along Storybook Trail through a real forest, and find miniature and life-sized creations from children’s faery tales and Mother Goose rhymes. You can stand on the trail and look, but if you get close and go inside or peek in windows, that is when the real treat begins. Or the real heebie jeebies, as the case may be.

There is a Western-themed town, which is hilarious, filled with more animatronics, and named Tofteville. The kids got a big charge out of the drunken walk, where you enter a building, and follow the path out on a floor balanced on springs. There is no way to keep steady.

I think I may just love Pinocchio Town the best, a European-style village that has several animated faces that peer from shutters two stories above you that swing open. The characters gossip loud enough to hear, about different storybook characters. You can enter a doorway and follow a path through multiple buildings, peeking into holes in walls, and holes in cheese, and reading about puppetry around the world, and controlling a miniature train on a track through snowy Alps. Through one curtained window is a kaleidescope, that simply turns as long as you stand there. One window reveals a fabulous 10-foot-high Rube Goldberg mechanism that runs balls through a wire obstacle course. And who can  resist the singing blackbirds baked in a pie?

I haven’t shown any photos of the rides, but I think I’ll save those for another day. There were too many fun photos in this post to bog it down further.

In 1960s, Roger Tofte seemed to be the only person who could see the final version in his mind’s eye. He was the target of many jokes and whispers that he had some screws loose.

Mr. Tofte can laugh at them all today, though I imagine he’s too sweet to do so. Both times we have visited the park, we have spotted him moving around, quietly under the radar, passing through doors that say “staff only” and happily waiting for toddlers to pass before he drives through on his scooter.