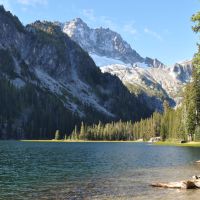 The 82nd Avenue of Roses parade is the first sanctioned event of the Portland Rose Festival season. Roses are very big around here.

I live about five blocks away from 82nd Ave, so when I heard the drums from my house, I made a last minute decision. Quick-changed out of my jammies (come on, don’t judge, it’s the weekend!), grabbed my camera, and hustled over to 82nd Street by 10am. I missed the beginning, but arrived in time to catch some good stuff.

The banner “Orgullo Morelense Cemiac” was one of the first I saw. I had never heard of these dancers until Saturday. I had to look them up. They are American citizens with roots in Morelos, Mexico, performing the Chinelo traditional dance popular in that region. I read in one Oregonian piece that the leader had one costume made to honor his new home in Oregon. I wonder if that’s the one you see above, on the right. (click the image to enlarge it)

We are simpler and more “small-town” out this far from the city center. I was also standing at the very end of the parade, so you see there weren’t many spectators. It was the kind of parade that makes you feel like you’re in a neighborhood. Which I am.

8 thoughts on “Avenue of Roses Parade”