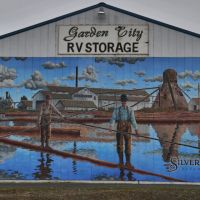 Wow! I had such a fun, spontaneous night last night.

True to my Bedouin-type nomadic spirit, I’m in Baltimore but live in Oregon, but just moved from the Boston area. Anyway, I’m here for training, and I’m a big Patriots fan. In Boston, a regular person like me can’t get tickets to the game. The stadium is sold out for years into the future. But the Ravens here in Baltimore haven’t sold out.

I was sitting in class on Monday, contemplating this (while simultaneously absorbing *everything* my instructors were saying, of course), and thought I would just mosey on over to the stadium in the evening and see if there would be a scalper willing to sell me a ticket.

I had never been to a professional football game before, and got a bit excited at the idea of seeing my Patriots. Another woman in class said she wanted to go also. We were jabbering about it and were overheard at the hotel front desk. Before we knew it, the evening supervisor had sold us his two tickets that were for his friends who never showed up. We paid only $45 and were off and running!

It SNOWED during the entire game, and the wind HOWLED. There were a couple of times when Shirley and I were nearly toppled onto the people in front of us because of the powerful wind gusts. I froze my cheeks off!

We agreed that it was a very good thing the game was so close all the way through, because we had to keep jumping up and down and yelling. That helped us stay warm.

It was a great game too. No one expected that the Ravens would be the team to nearly unseat the Patriots. That made it doubly exciting to be there. That, plus the things I never see on TV: the cheerleaders doing flips in midair, the band, the flag twirlers, the contests that people kept winning, and the pre-game and halftime entertainment, not to mention the brave guys combing the stands selling beer, soda, and hot cocoa.