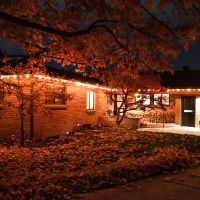 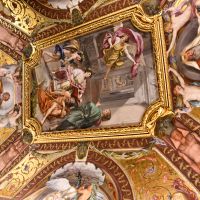 In the absence of our newest local grass roots what’s happenin’ PDX reporter (Mark, who contributes to PDX Pipeline), I felt the need to fill the photo/news void left in his wake. (Mark is currently in San Francisco visiting friends to distract himself from waiting for someone to call him about a job….)

My always-engaging kiddo was student-of-the-week last week, and had a big self-presentation during the last 15 minutes of class time on Friday. She also had the permission to bring a pet. The available parent du jour was moi, so I had the honors of zooming up Cornelius Pass, stopping at the school’s office to pick up her dad’s apartment key,  zooming over there to scoop up the unsuspecting Cookie cat  and plopping her into a cat carrier, and scooting back to school to wait for the exact moment. When it was time, I swept in through the back door of the library and … tah-dah!! Held high the offering of claws scrabbling, hair on end, mewing Cookie for the class’s consumption. Actually, once brought out of the carrier, she was an amazingly mellow and tolerant specimen, and in my daughter’s arms allowed herself to be petted by everyone who wasn’t allergic.

My reward for all that was to bring my daughter home with me after dropping off cat and key. Our evening was pretty mellow: had to visit ALL the farm animals, examine Mom’s work in cleaning the chicken nesting boxes and coop, see how much the puppies have grown, roll on the ground with the Schipperkes, and fill the goose pond. Then we washed up thoroughly and made peanut-butter oatmeal cookies with a peanut glaze. One of the Uncles called me “Devil Woman” later, because he could not bring himself to stop eating them. I’m sure he meant it in the nicest  possible way. We watched Charlie and the Chocolate Factory with the usual delight and smattering of giggles, then closed the day with two stories from Anderson’s fairy tales: The Emperor’s New Clothes (1837), and The Flax (1849). The very last line is beautiful: “But the children could neither hear nor understand this, nor should they; for children must not know everything.”

This morning we got moving early and we were at her favourite Portland park so far: Columbia Park, off Lombard. The Uncles told us that there was a pool there, but we had never seen it, so that was our first mission. It was cool, cloudy, and wet this morning, and about as perfect a Portland morning as they get. We walked through the gorgeous trees of the park (only hugging a few), and at length came upon the round pool building, across from a field full of mini-soccer players and their enthusiastic and damp parents.

The pool is open every day, heated, indoor, and the price is reasonable even for unemployed single moms. Yay! We took their booklet to plan for a future swim date, then gave a wide berth to the footballers on our path through the trees and over to the wall ball court. My daughter taught me the ins and outs of the highly specialized and regulated game of wall ball – the way it is played at recess at her school. We weren’t getting much wall ball in until I shouted “No more rules! Let’s just play! I can’t remember all that anyway, I’m old!”

It was great exercise, and we invented a few more rules for her to take back to school with her next week. Then, as will inevitably happen in a park with trees, she got distracted by the squirrels and we let the ball lay forgotten. Totally forgotten. We were already in the car before she stopped me, “Wait! Did anyone bring the ball?” After we picked up the ball it was an easy trip from Lombard to I-5 to the Alberta Street exit, and we were on to the next stage of our Saturday adventure.

We parked on 11th – as close as we could get – and were rapidly distracted by the drums from what was probably The Rhinestoners warming up. Since most of the band was not there, we moved on and soon came to Wendy Rover and her daughter, fellow henna aficionados, who answered many questions for us based on their vastly superior experience and knowledge about the topic. We wished them a lovely day and moved on.

The Alberta Street Fair is the longest (lengthwise) Portland street faire I’ve attended so far. From 11th to 31st it ranges, and the two of us did not even wander to the far end.  We made it as far as the Main Stage on 20th, but had to turn back and cut our day short in order to be back at The Farm in time for her father to pick her up again.

Our first order of business was to find some food. People were packed around one establishment – always a sign that good food is on the menu – and we put our names on the list before asking how long the wait. “About 45 minutes,” we were told, and promptly went to look for another place to eat. Right across the street is the Fuel Café – exactly what we were looking for: perfectly Portland, comfortable, a short wait in line, and scrumptious  food. Oops, my daughter’s “basic grilled cheese” included jalapeño jack – look out for that if you’re dining with a 10 year old. She focused on the cheddar side of the sandwich, and I savoured my Southwest Tuna Salad with actual real, live fresh garden lettuce and cilantro, and coffee served in a mug. She had a mango Italian Soda. We were two spoiled girls.

Tummies happy, we continued on, visiting tables and booths, talking with the vendors, appreciating the eclectic fashion sense among Portlanders. Siren song enticed us around a corner into an empty lot where we found the Interactive Kid’s Activity Center with a soundtrack provided by the all-women group Soundspell. Further down the road, we couldn’t help stopping to admire the brilliant murals on Alberta Street buildings as we made our way eastward.

Suddenly we heard a booming circus emcee voice and hastily said goodbye to the vendor in front of us so that we could locate the source. Good call! It was probably the best show of the day, and that’s going out on a limb, considering I missed most of what the faire had to offer. We discovered Kazum! self-described as a circus/acrobatics group. Noah Mickens emceed the enormously appealing acrobatics and dance circus-type show, featuring the enchanting hula hoop professional: Amy Hatfield (recently spotted supporting the March 4th Marching Band at Tour de Fat).

Kazum! is incredible. (I think their T-shirts sported an umlaut.) We were treated with a series of dance- and acrobatics- routines by the men and women in the group. First up were lions and their trainer, followed by hula, acrobatics, dancing, more acrobatics, and more acrobatics. The gorgeous women were tossed into the air by laughing strongmen in tights, and all of them displayed enviable upper-body strength and firm abs all while maintaining choreographed arm movement, no fear of heights, and smiles in unison. (I need to go to the gym…)

Cowa-freakin’-bunga! That was amazing! When the top hat came around, we tipped in not only a coupla bucks, but also a lucky T&A heads-tails coin that will hopefully pass the happiness forward.

At this point we were starting to worry about getting back to The Farm on time, so we turned around. Found a mirror vendor – wow, those creations are astounding. No matter how hard we tried to hurry, we kept being waylaid, but only by the most deserving. Stepped into Chris Ellis’ studio because he was creating on the keyboard. He called to my daughter to sit at the keyboard and set it up to play what he called “Vampire Dance Club.” As she became more comfortable with performing for an audience of strangers-becoming-friends, the tones became delicious despite their creepiness, and the grown-ups introduced each other. Chris Ellis told the background story to my favourite of his photographs on the wall – a lovely woman outside a cemetery in Paris, checking her face in a compact while holding her cigarette out of the way with firm delicacy.

Lee Meier – professional photographer – and his son Nelson Meier introduced themselves and Lee insisted that we consider his studio on First Fridays in Multnomah Village. Lee had phenomenal gear (photographic that is) with which to capture the rollicking Alberta street sights, and assured me his photos of Kazum! would be available online.

Bearing due West, we aimed for the parked car, but saw so many other cars that demanded attention. The Portland Artcar Revival Club wowed us all with the organization of the famous art cars we’ve all seen around town. There were a few of these in Eureka (CA, where I lived pre-Brandeis), but it tickled everyone in sight to walk up close enough to touch these motley mobile artworks like “Trophy Wife” (a car covered in trophies and trophy plaques), and Rev. Bill’s Vacation Bible Camp – featuring Jesus as the King of the Road.

Again, we tried to escape the street, but found Wendy again, and couldn’t resist the pull of a glitter dolphin in henna at its finest. Finally, the two girls moved with me toward the car, only to be stopped again by The Alberta Street Clown House. We watched them crashing bicycles (well, I guess one could call them bicycles. In Portland they morWh into things sometimes unrecognizable.) into each other, and then were enticed to join in a bagel war, where my own youngun’ pelted the nurse with a bagel. Good on ya, mate!

Finally, finally, we forged against the wind and thickening clouds and spotted the Dragon Wagon (my car – it’s a long story) again. Good old 11th street. We caught I-5 outta there, whipped onto 30 West, and in little more than half an hour were tooling our way out toward Scappoose and The Farm. Gathered enough eggs to fill a carton, watered the cats, ate some peanut butter oatmeal cookies, and my little girl went home with her dad. Whew! Day well spent.